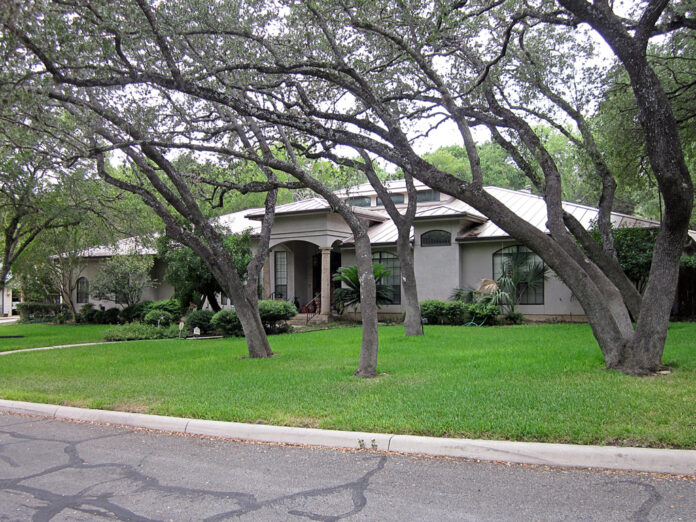 Castle Hills is a 2 ½ square mile city with one foot inside and one foot outside San Antonio’s north central Loop 410. It also is bisected from north to south by Northwest Military Highway, but one rarely hears it called “a city divided.” It is a cohesive little village with a strong sense of self. It is one of those unique “neighborhoods” that for more than 65 years has defied a no-deposit no-return society, managing to hold onto the vision of its founders.

“We are a small, friendly community just minutes from the Medical Center, the San Antonio International Airport and the San Antonio River Walk. North Star Mall and Park North Mall are less than five minutes away,” said former mayor, Marcy Harper, who had been at the helm for over six years.

A community of mostly rambling ranch-style houses sitting on oak shaded lots that average a half acre, it is known as “the City of Beautiful Homes,” a denomination not taken lightly by its residents. One of the residents was so concerned about the appearance of a dilapidated house two doors from him that he bought it and demolished it. In addition to its residents, Castle Hills is home to more than 600 medium-to-small businesses, including retail specialty stores, restaurants, hair salons, and other personal service establishments. The city has a variety of churches and public and private schools.

The Castle Hills area was occupied from the 1600s through 1875 by Native American tribes—Coahuiltecans, Apaches and Comanches. In the 1920s, a smattering of Anglo families, many connected to the oil business, invested a chunk of their profits in the construction of masonry homes in the pristine oak-studded countryside. One of the most notable was Chester A. Slimp’s two-story rock “castle,” which rose like a beacon in 1929 on 44 acres near what is now the intersection of Lockhill-Selma Road and West Avenue. Only 2.5 acres of the original estate is still intact.

In the 1940s, war-weary GIs returning from World War II were ready to settle down and claim the American dream, a house. Some of them found the oak-shaded country north of San Antonio an ideal place to do it. As the area became more populated, the residents decided it was time to incorporate their little city so with the City of San Antonio breathing down their throats, they hurriedly incorporated Castle Hills on July 3, 1951. In a salute to one of their founding families, they named their city Castle Hills.

With few exceptions, Castle Hills’ homes were built in the late ‘50s to early ‘60s. Today the city has its own police, fire and rescue, public works/animal control, and sanitation departments. Electrical power is supplied by San Antonio’s City Public Service.

According to U.S. Census figures, the city’s population peaked in 1970 with 5,278 residents. As the young people grew up and left home, the 1990 census dropped to 4,100 residents. But according to 2018 Census Bureau numbers, that number is on the rise again, reaching 4,471 as new families are moving in.

“We are surrounded by the City of San Antonio, and we take great pride in our small town atmosphere within a small area.”