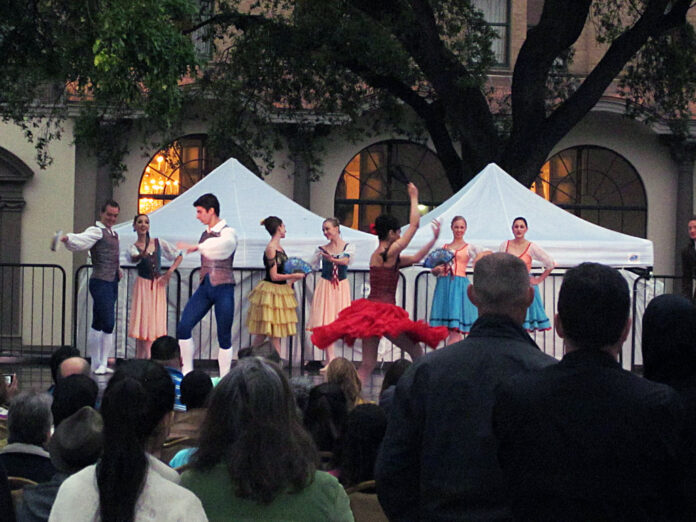 The Henry B. Gonzalez Convention Center in downtown San Antonio is awash in public art, the aesthetic face of the city. From a spectacular recycled material chandelier by Anita Valencia and an almost hidden group of niches by San Antonio artists including David Zamora Casas, Cakky Brawley and the students of Say Si, a youth arts program, in the bottom of the building, perfect for Tower of the Americas tourists, to the intricate and overlooked Aztec-inflected patterns of the carpets by Louis Vega Trevino, the Convention Center bristles with some of San Antonio’s hidden art. Hidden in this case because it is not somewhere residents often find themselves.

Sometimes the art around us hides in plain sight. We do not see it, or recognize it, or name it as art, and so it remains part of the visual static of an over-stimulated world. At times, in hectic city life, we don’t look up above eye level, or down beneath our feet, and so we miss works which hover over us, or enfold us. And often we so constrict our idea of what “art” actually is, or where it might be found, that we can look straight at it and not recognize it.

The Torch of Friendship at Alamo Plaza is hard to miss, but within the Torch’s shadow, Anne Adams’ tiles for the VIA stop across the street, quilt-like and subtle, almost disappear into a category we might label urban decoration.

In fact, one could easily lose the rich tile tradition hidden before our very eyes throughout San Antonio, a tradition worthy of a separate story. Decidedly incomplete, a tour could include the tile work throughout the RiverWalk, including the work of Oscar Alvarado, and Malou Flato’s pieces at the street-level Houston Street bridge and her similar pieces outside the H-E-B Central Market in Alamo Heights. And don’t miss the historic tiles throughout the courtyard at the McNay Art Museum – culminating in the Peacock Staircase. Yes, even in an art museum there can be hidden art.

While murals can hardly be considered hidden, a preponderance of them in San Antonio, more than 30 largely on the Westside, and the creations of the mural teams of San Antonio Cultural Arts, are viewed mostly by their immediate community – evidences of pride and empowerment. Depression era murals in the lobbies of the John H. Wood, Jr. Federal Courthouse and the San Antonio Express-News building help one consider the community’s murals in a broader context. And though graffiti is, in the eyes of property owners and police, a crime, the exuberant canvas for graffiti that is the building at San Pedro Avenue and Quincy St., is an ever-changing gallery of voices.

Overhead, in addition to Valencia’s Convention Center chandelier, look up at the Tiffany’s skylight in the lobby of the Menger Hotel and the Dale Chihuly Venetian ceiling at the San Antonio Museum of Art. Hard to see from the street, the drain spouts of the Tower Life Building are gargoyles, while the Aztec Theatre sports the all-knowing face of an Aztec in squares above street level.

On the other end of the spectrum, there are extraordinary university and corporate collections throughout San Antonio that are both public, and not. Trinity University has a wonderful collection of outdoor sculptures available for viewing and USAA has a massive collection mostly related to the Air Force.

And while I have overlooked the churches of San Antonio and their presence as works of art in the community, it is somehow appropriate to end with Peacock Alley, the lobby of the St. Anthony Hotel, so called because it comes complete with overstuffed “peacock” magnificence.

While we’ve spent considerable time talking about the “hidden” visual arts, let me dwell for a time on the “visible” performing arts. San Antonio is home to the 80-year old San Antonio Symphony, an organization of 72 instrumentalists who play at the Tobin Center for the Performing Arts, on a number of occasions backed by the San Antonio Mastersingers. In addition, the San Antonio Opera, Children’s Chorus and Ballet San Antonio also perform at the Tobin. The Tobin was, for many years, the city’s Municipal Auditorium, hosting among other events, high school graduations. About five years ago it was updated, making it an “acoustically perfect” performance hall. Seating approximately 1,700, it also hosts performances from around the world.

The Magik Theatre Company has been performing, for children, for more than 20 years, in schools and at its own venue. And other “live” acting companies include the Classic Theatre, the San Pedro Playhouse, the Woodlawn Theatre, and the Sheldon Vexler Theatre.

In addition, with the opening of The Pearl, Doc Watson, a jazz instrumentalist has opened Jazz Texas, and there’s been for years here the Jim Cullum Jazz Band, now playing around the area. And lest we forget, country music is a hot commodity in South Texas, and two of the longest running establishments for hosting such music are Floore’s Country Store in Helotes  and Gruene Hall in New Braunfels.